Professor Alan Tait is Professor Emeritus with the Open University UK, with multiple international involvements including with EDEN and the ICDE. This interview took place following Alan’s keynote at the 2018 EDEN conference in Genoa, outside on a hot Italian afternoon. 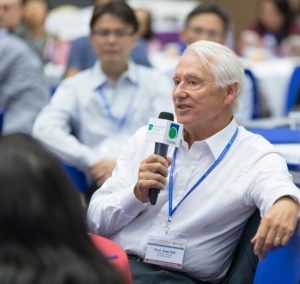 Alan’s profile: Alan Tait is Emeritus Professor of Distance Education and Development at the Open University UK. From 2013-2015 Alan was Director of International Development and Teacher Education, and before that was Pro-Vice Chancellor (Academic) at the Open University UK 2007-2012, and from 2004-2007 Dean of the Faculty of Education and Language Studies. He was Editor of the European Journal of Distance and E Learning (EURODL) 2005-2013, was from 1989-1998 Editor of Open Learning, was President of the European Distance and E-Learning Network (EDEN) from 2007-2010, and Co-Director of the Cambridge International Conference on Open and Distance Learning 1988-2013. In 2012 Alan was awarded an Honorary Doctorate by Moscow State University for Economics, Statistics and Informatics, and appointed Visiting Senior Online Consultant at the Open University of China in 2013. Alan is founding Emeritus Editor of the Journal of Learning for Development (www.jl4d.org), produced from the Commonwealth of Learning; Visiting Professor, Amity University, India; Distinguished Visiting Professor Open University of Hong Kong; Visiting Fellow of the Centre for Distance Education at the University of London; Visiting Professor at Aalborg University, Denmark 2012-2016; senior member of St Edmunds College, University of Cambridge, and transformation advisor for the Commonwealth of Learning at Botswana Open University 2011-2016.

Alan holds degrees from the Universities of Cambridge, London, and The Open University. He has worked widely in developing countries, and for international organisations such as UNESCO, the European Commission, and the Commonwealth of Learning. Recent publications include ‘From Distance learning to open education: continuities and discontinuities’, in Journal of Learning for Development (2018); Open Universities: Past, Present and Future’, in Journal of the Asian Association of Open Universities (2018), ‘European leaders in Distance and E-learning’, in Journal of Learning for Development 2017; ‘The Lifelong Learning University of the Future’, in Cendon, E., Mörth, A. & Pellert, A. (Hrsg.), Theorie und Praxis verzahnen – Lebenslanges Lernen an Hochschulen; ‘Student Success, putting the learner at the heart of the system’, ICDE, Oslo 2015; ‘Enriching our Students’ Lives’, in Explorations in Adult Higher /Education, Fall, Number 3, Voices that shape our Vision, pp 16-20 2014 ; Open Universities and innovation in Higher Education, in Bischoff F/Prang B (Hrsg), Weiterbildung und Lebenslanges Lernen an Hochschulen, Internationale Impulse für das deutsche Hochschulwesen; ‘From place to virtual space: reconfiguring student support for distance and e-learning in the digital age’, in Open Praxis, 2014; Distance and E Learning, Social Justice and Development: ‘The relevance of the Capacity Approach to the mission of open universities’, in the International Review of Research in Open and Distance Learning, 2013. Other publications can be found at www.researchgate.net. Alan has given keynote lectures in a range of places, most notably in 2014 the Asa Briggs Commemoration lecture at the Commonwealth of Learning Pan-Commonwealth Forum, Abuja, Nigeria.

In his interview, Alan mentions the late Roger Mills: http://www.eden-online.org/roger-mills-passed-away/